You progress through Magia Record by battling through story quests. The game uses a turn-based combat system, where the player always goes first.

When you first enter combat, this is the screen you see (hover over the image to see what different areas are): 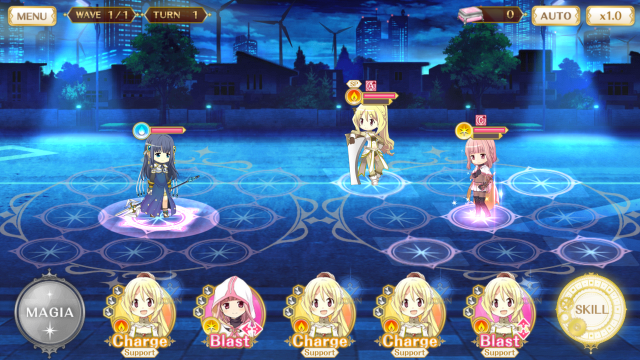 For a detailed explanation of discs, see main article: Discs 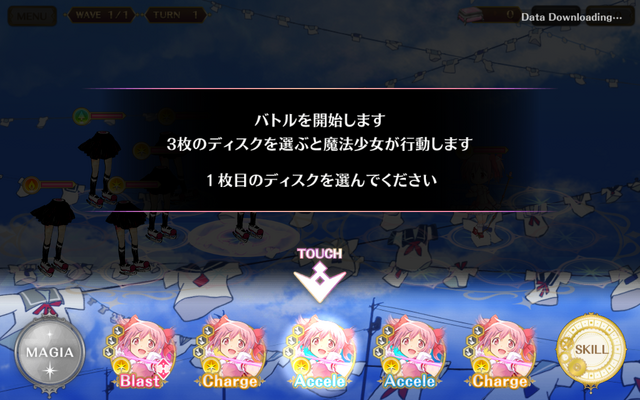 Discs are your main attacks. Every Magical Girl in the game has a set of 5 discs assigned to them, and each turn 5 random discs are chosen from your team's disc sets.
You must then choose 3 of these discs to attack with. Click on an opponent to target it, then click on a disc to queue the attack. You can attack different opponents with each disc.

There are 3 types of discs: 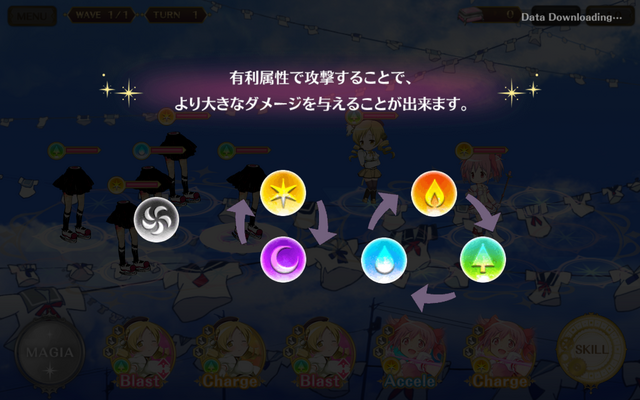 All Magical Girls and opponents in the game belong to one of 6 elements. When choosing your team and discs, consider elemental strengths and weaknesses. When fighting against a strong element, you will do more damage and receive less in return. Conversely, you will deal less damage to your weak element and receive more damage in return.
When a girl is strong or weak against a particular target, an arrow will appear next to their disc indicating if they will deal more damage or less. 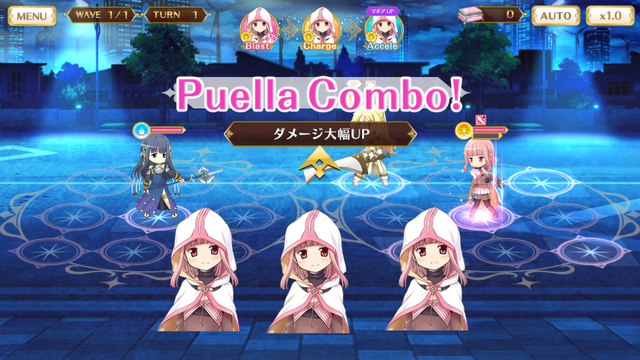 Whenever you pick your attack discs, you should keep combos in mind. 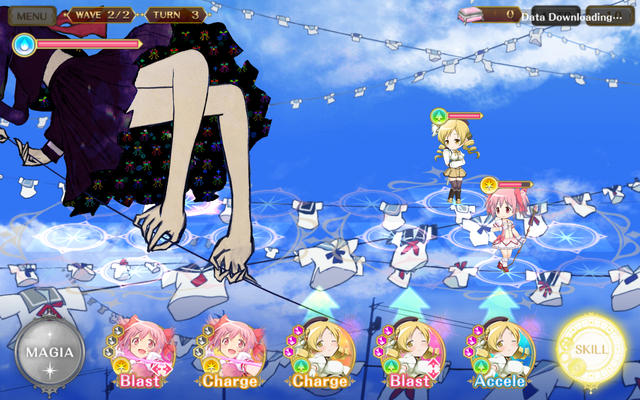 When a Magical Girl has attacked 3 times, she is able to Connect to another Magical Girl. To use a Connect, hold and drag the disc from 1st girl (the one with the Connect available) over the 2nd girl (the girl who will receive the Connect) and release. When this happens, the 2nd girl will attack instead, but will gain bonuses based on the 1st girl's Connect. These bonuses remain in effect for the entire turn.
For the purpose of a Puella Combo the Connect Disc counts towards 'both' girls.

Example: In the picture above, Tomoe Mami's Connect is available and can be dragged onto Kaname Madoka. This means that Madoka will gain the bonuses from Mami's Connect, and she will attack instead of Mami. 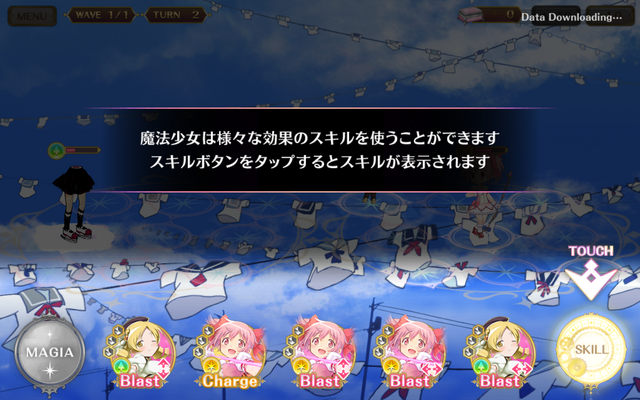 Before you enter battle, you can equip your Magical Girls with Memoria. These grant either a passive ability (always in play) or an active skill (must be switched on) bonus.
When in battle, you can activate skills to give your team a short-term edge. There can be a boost to a character, a debuff to an opponent, or both.
Be warned - skills come with a cooldown, during which they can not be used. 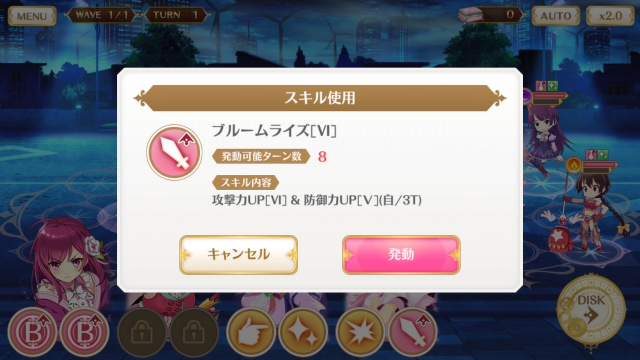 Once a skill has been used, it enters cooldown. 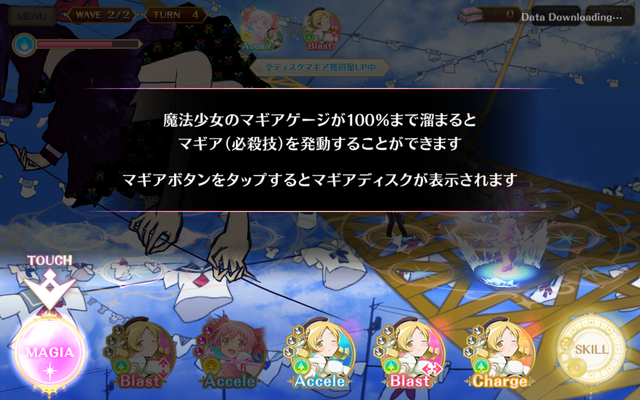 When a Magical Girl's MP Gauge reaches 100, she is able to unleash her Magia. This is a more powerful attack that may inflict status effects on opponents or boost the strength of allies.
5* Magical Girls have the extra ability to summon a Doppel when their MP gauges reach 200. These represent the ultimate attacks, dealing large amounts of damage and granting powerful bonuses.

The second half of the turn is the enemy's turn. Basic enemy attacks follow the same general rules as player attacks with a few tweaks:

There are several boss fights throughout the game, usually in the form of witches, rumors, or other Magical Girls.
Unlike basic enemies, bosses can attack up to 3 times per turn. They usually have a lot more HP and deal significantly more damage.
Magical Girl bosses may be able to access the MP gauges and deploy their Magia or Doppel, Connect to other enemies, or build up Disc Combos.
A weakness of some bosses, however, is the fact that they take up several squares, meaning that Blast, Magia, and Doppel attacks will hit them more than once. 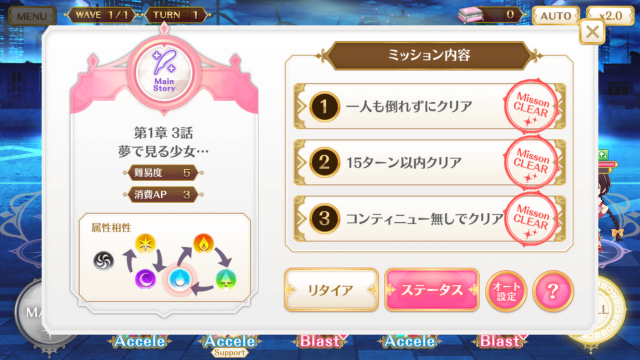 From the battle menu you can review your mission objectives, quit the battle, or amend the behaviour of the Auto Mode. 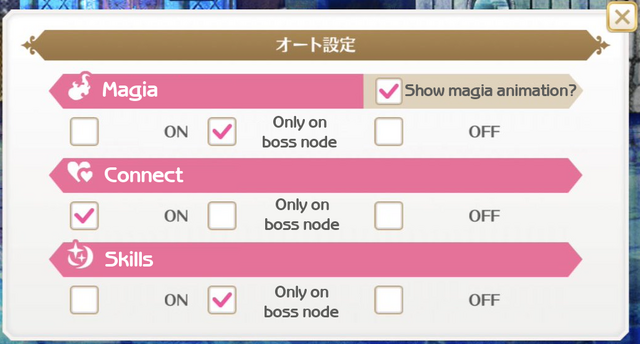 Auto mode is available on the Main Story for all players, and on other story quests after they have been completed at least once. While it simplifies the game and makes tasks such as item farming easier, it should not always be relied on - the Auto mode is notoriously bad when it comes to its disc selection and skill use.

From this menu, you can select when Auto mode uses skills, connects, and Magia.

Retrieved from "https://magireco.fandom.com/wiki/Basic_Gameplay?oldid=38241"
Community content is available under CC-BY-SA unless otherwise noted.