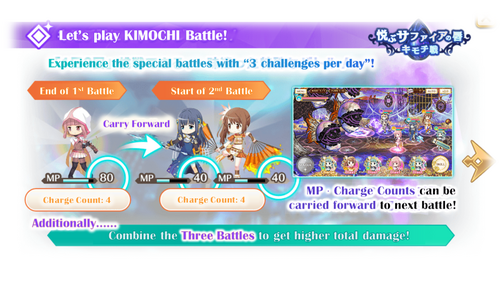 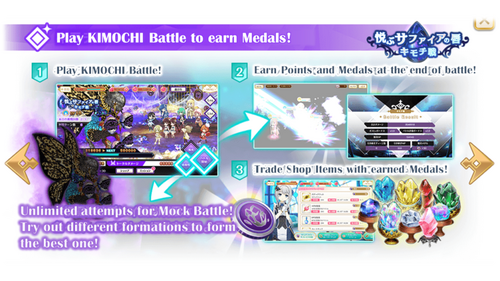 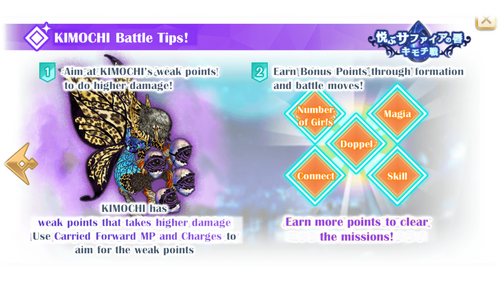 3. Players use a team of up to 5 of their own Magical Girls - there are no Supports. When composing a team, check what element the Kimochi is! Elemental advantages and disadvantages are boosted in this battle, so using a strong attribute will deal much more damage while using a weak attribute will deal significantly less. Void attribute attacks will still deal neutral damage.

6. Compared to previous battles, Vigorous Opal Neck has high passive and active Status Ailment Resistance Up and Anti-Debuff, making it harder to weaken for individual turns.

1. In addition to the per-match bonus, this event features a Ranking System. After each battle, the amount of damage dealt is converted into Grade Points (GP), which are then added to the GP total. The more GP earned, the higher the player's Rank. Obtaining higher Ranks will result in greater overall rewards at the end of the event.

2. After the initial 2-day ranking period, players will be divided into teams based on ranks. Teams will gain points based on the total number of opponents repelled, rather than damage dealt.

Rewards based on the total number of GP a player obtains during the course of the full event.

Rewards based on the number of Kimochi defeated by the player's group.

Rewards based on the highest damage the player manages over the course of 1 day.